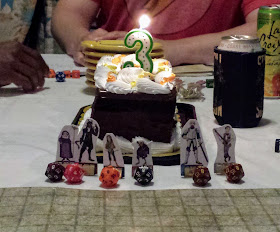 October 20th marked the third anniversary on 5e Land of Azurth campaign, though we played our anniversary month game a couple of weeks earlier. The sessions have been about monthly, so it isn't as many adventures as it might be, but still is a milestone for a group of adults with busy lives.

In that time, the party has ventured briefly into the depths beneath the Clockwork Princess's Castle Machina. They defeated the schemes of a witch and cult of jaded gourmands in the Enchanted Wood. They took on the crime lords known as the Baleful Burly Brothers in Rivertown. The escaped the clutches of a manticore named Mortzengersturm. They explored a Cloud Castle and escaped a cloud giant wizard, Zykloon. The cleared out a wererat carnival. They rescued Gwendolin Goode from the Motely Pirates, and almost obtained the Confection Perfection from the Candy Isle.

Then things got really weird. They explored a floating Gelatinous Dome. They headed out into the Etheric Zone to break a Super-Wizard out of the Carnelian Hypercube. The investigated a whole in the ground and fell into a land of mushroom people, then a land of warring clans living in a ruined spacecraft, and hunted by invisible bugbears. Escaping their they were accosted by wooden gargoyle puppets, and encountered a weird control of dragon-wannabes, before finally getting whisked back to Azurth by the timely intervention of Father Yule on a windswept peak.

They were barely back in Rivertown when Shade's estranged mother sent them into the fairy-madness of House Perilous. Their adventures there included a brief sojourn to France. On their way back to Rivertown, they got sidetracked helping a milltown and forest overrun with iron woodsmen.

At the moment, they're looking for a fallen star in the caves of a group of Death Dwarfs. 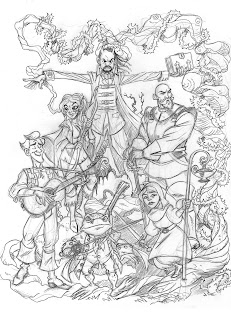