Annihilation and the Dungeoncrawl 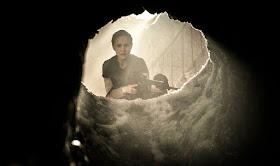 Some relatively non-spoilery ways I think the movie adaptation of Annihilation could inform dungeoncrawls:

1. Relatively mundane creatures with an odd twist can create atmosphere, but also a more interesting threat.
2. Oddly behaving things can create a sense of menace without actually doing anything hostile.
3. Dressing a locale is important. The details don't have to be extensive, but they should set the adventuring environment apart from mundane environments.
4. Even a map-able/navigable terrain can be made to feel disorienting or untrustworthy.
5. The terrain itself may be toxic to the visitor. (Operation Unfathomable already points in this direction, as no doubt others have.)
6. The remains and things left behind by those who went before can provide useful clues, but also add to a sense of dread.