My Secret and Possibly Quixotic Yearning for Vanilla 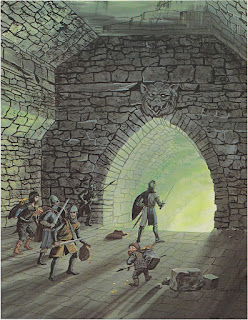 Since I've entered the blogosphere (over 10 years ago now), I've imagined all sorts of variants of D&D-type fantasy from Weird Adventures to the cyberpunk planes City of Gyre, I've often even eschewed weird in the classic "Weird" sense. My takes were hardly even the most out there among the DIY crowd in which I have often found myself.

But there are times when I think back with nostalgia to a sort of game I never really played. Or games, I should say, it's not always the same. Sometimes it's nostalgia for fantasy before D&D was a thing, something like a mix of Byfield's The Book of the Weird, Alexander's Chronicles of Prydain, and the film versions of The Last Unicorn and The Hobbit. Other times, I think it should be a bit grottier, like the World of Titan, and the illustrations in the Fighting Fantasy books, and more adventure-y like select illustrations from the Moldavy-Cook editions and the earliest AD&D books. The rarest, least frequent itch is for something like the illustrations of the "High D&D" era defined by the likes of Elmore and Caldwell.

All very vanilla, I know. Our elves aren't different, they're just elves. Feudal Kingdoms, bearded wizards in towers. All the tropes! 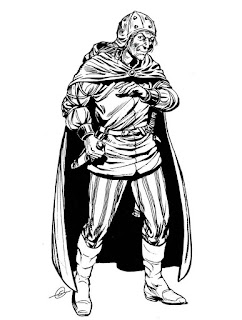 I don't really know what the yearnings about. Some of these things were the inspirations of my pre-D&D days, so maybe its sort of the world that had moved on before I was old enough to take part in it. Others, well, they were maybe what was in the gamebooks I was playing with, but I was ignoring it in favor of the stuff I was reading--comics books, Edgar Rice Burroughs novels, Conan yarns.

Of course, its all relative. I'm sure some people think my Land of Azurth game is pretty vanilla,  but to me is too knowing to be that. Maybe that's why I never pull the trigger on a game inspired by one of these things. Still, it's something I think about.
Trey at 7:00 AM
Share