If You Wanna Get to Heaven... 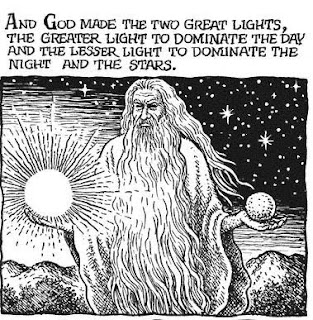 The dominant faiths of the City and the strange New World came were brought from Ealderde. The Natives had their own religions of course, as did the black folk, but their belief systems have either been persecuted out of existence (like some of the Native tribes) or forced to syncretize with the predominant religion (in the case of the black folk).

The Ealderdish colonists practiced a variety of faiths, but all of them were variations of a monotheistic religion which, like many things on the City’s terra inusitata (if my rusty Latin is still functional), it bears some resemblance to faiths of the world we know. The central holy writ of the religion is known as The Good Book. Many of the stories in it resemble incidents from the Biblical Old Testament or other works of the Abrahamic tradition, but tend to be less specifically placed in time or place and more “fable-like” or "folk-tale-like" in presentation. Likewise the New Testament analog with its “Redeemer,” is more of a series of parables, dialogues, and sayings, and less of a narrative.

There are numerous faiths based on numerous competing interpretations or variations of practice related to The Good Book. There’s the Old-Time Religion with very little church hierarchy, and a strong emphasis on good works, and on personal study the Good Book. Variant Old-Time ecstatics may experience glossolalia or other mystical manifestations. Such practices are seen as unsophisticated and rustic by City folk, but this sort of thing is common in the villages of the Smaragdines.

On the other end of the spectrum is the Oecumenical Hierarchate. This church is older that the so-called Old Time Religion, and has much more elaborate ritual and church structure. Its practitioners venerate a number of saints and keep a full calendar of ritual observances. Being less common among the Ealderdish who came to the new world, Oecumenicals are stereotyped as superstitious and foreign.

The people of the City’s world have a large amount of clear evidence of the existence of God or gods. After all, numerous adventurers have encountered angels from the Armies of Salvation or devils from the Hell Syndicate. A few have actual made physical journeys to Heaven or Hell. Confusingly, the Heavens visited and the monotheistic Gods encountered are not identical. In other words, multiple, competing sole creators seem to exist! 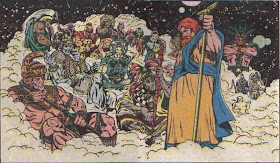 The number of heavens for these alternate Gods is generally given as “seven,” but its likely this is just a poetical convention. Some scholars believe there are as many heavens as there are faiths--each with a God that fits their particular belief. The devout are, of course, skeptical of this idea, and tend to view all Gods but theirs as false.

How this arrangement came into being, and what it says about the nature of the universe is subject of a lot of debate, but no clear answer.

It should be noted that “pagan” gods and goddess are also known to exist, but these beings typically seem weaker and closer to human scale in terms of power--though wielding magics well beyond mortals. They’re sometimes referred to as “small” gods, by thaumaturgical practitioners who are more accepting of their existence than the faithful.

There are also concepts personified (called eikones by scholars), seeming existing on a level equivalent to the greatest small gods, or between the small gods and the singluar [sic] God(s). One theory holds that the eikones are powerful spirits created by God to help in the day to day managment of the world, while another holds they are the product of the human mind and its inherent tendency to anthropomorphization.  Interestingly, the general populace is mostly unaware of their existence, despite the fact their lives are affected by them daily. More on this class of beings in a later post.
Trey at 6:54 AM
Share