Strange Things at the Automat 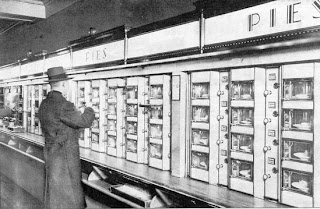 A phantom automat stalks the streets of the City. Horvendile & Hawberk’s may appear any where, but is less likely to be found on a busy thoroughfare or crowded street. It seems to thrive in the shadows. It's never found in the same place twice, and less than half of people who have been there have visited it more than once--and urban legend holds that to encounter it more than seven times is a bad omen, and harbingers death.

Horvendile & Hawberk’s, or sometimes “Double H’s” (used somewhat superstitiously), looks new, though its decor and signage looks a decade or more out of date. Decorative glass fixtures around the upper walls are etched with astrological symbols. The staff is always crisply dressed and pleasant, but doesn’t engage in conversation. In addition to the automat staples like coffee, pie, sandwiches, and macaroni and cheese, the coin-operated, hinged glass slots at double H’s sometimes hold (seemingly random) unusual items:

1. A Subway and Elevated Rail-Lines map of the City, with unknown stations identified.

2. The egg of an Oriental Griffin, worth a fortune -- had it not been cooked sunny side up. Eating it leads to heightened sight for 48 hours.

3. A girasol ring, worth $200 to a fence, but evaluation by an expert reveals it to mark the bearer by tradition as the heir to a micronation in Eastern Ealderde.

4. A risque postcard of a Poitêmienne prostitute, imbued with the power of the eikone Doll, so that the owner has the power of charm over members of the opposite sex as long as they carry it on their person.

5. A used napkin with the address of a warehouse where a Staarkish Imperial military manhunter golem has been stored. It’s battered, but only needs a power source to return to operation.

6. Four-and-a-half pages of illuminated text in a magical script from a grimoire. on which someone has over-written a series of bawdy limericks. Contains 1-4 spells, but must be recopied to separate the formulae from the limericks.

7. A post-bill asking after a lost dog named “Jakey.” The crude drawing of the dog is so vague as to be unhelpful, but it's strangely unsettling to the viewer. Any one who touches it will have vague nightmares and unrestful sleep that night.

8. A ornately engraved antique sixgun. It's intelligent (Int 17) and will attempt to dominate any bearer to force him or her to seek out its original owner who’s taxidermied corpse is currently on display in a roadside curio and oddity museum in the Dustlands. When used, it confers a +2 to hit.

9. A slice of preternaturally tasty pecan pie, that the consumer will talk about from time to time with some nostalgia for 1d20 years after.

10. A pocket note-pad with a glossary of hobogoblin cant and signs, which, if utilized improves reaction when encountering the tramp humanoids, and provides other helpful information for to “gentlemen of the road.” 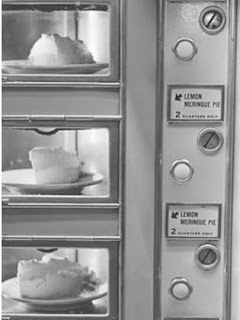