Warlord Wednesday: Wolves of the Steppes

Due to blogger malfunction let's re-enter the lost world with a late installment of my issue by issue examination of DC Comic's Warlord, the earlier installments of which can be found here... 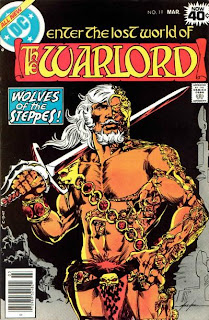 
Synopsis: With the sky-sleds they picked up last issue, Morgan and Tara have taken their search for Joshua and Deimos to “the far corners” of Skartaris. Morgan says there’s only one place they haven’t looked that fits Saaba description of “half light, half shadow”--the polar opening where Skartaris meets the outer world.

In his lair, Deimos watches our heroes in a large crystal ball, Ashiya attending him, and oblivious baby Joshua playing nearby. Ashiya indugles her maternal instincts by playing wiht Joshua, but Demios reminds her the boy serves but one purpose--to allow him to enact his revenge upon Morgan, who destroyed his empire, killed him, and condemned him to a life in darkness.

Deimos’s inhuman servant brings him a goblet of fresh blood and he gulps it down before railing against his current state. His sorcerous vitality is only sustained by fresh blood, the decay of his body only slowed by remaining in darkness. And Travis Morgan is responsible.

Deimos summons his magical powers and directs them into the crystal ball, calling forth a storm to torment Morgan and Tara. A lightning bolt strikes Tara’s sled causing her to crash, separating her from Morgan.

Tara awakens under the lecherous gaze of Torgash, the leader of a group of horsemen. He claims her as his own, but soon finds no man touches Tara without her consent, as the first hand he lays upon her is cut off cleanly at the wrist. Before the rest of the surprised tribesmen can respond, Morgan and Shadow attack.

In a few minutes, the horsemen are ready to retreat before the fury of the strangers, but fate intervenes. The flaming wreckage of Tara’s flyer explodes, knocking the heroes (conveniently) unconscious. Torgash wants to slit their throats, but his comrade Nikola reminds him that for slaying their brothers the whole tribe should decide their fates.

Tara and Morgan awaken in the horseman’s hall tied to a wooden pillar, amid feasting and revelry. Torgash tells them their fates have been decided, and offers a demonstration of what’s in store for them, by ordering Shadow, suspended in a net, lowered into a pit with two bears.

Morgan goes into one his berserker rages and bursts his bonds to fight for justice, and his wife’s dog. He goes for Torgash, but winds up tackling one of their other captors, sending them both into the pit. Morgan grabs the hapless man’s sword and tosses him into the waiting jaws of a bear.

Torgash tosses Tara into the pit, but Morgan catches her. The bears have finished off the other man, and are now eyeing them. Morgan and Tara share a tender moment, thinking that there deaths are near. Then Morgan, brandishing the sword, yells a challenge at the bears--then drop kicks one. Neither that, or any of his sword-slashes do any good. The bear swats him a aside, then moves in for the kill.

Just in time, A spear thrown from above kills the bear, then a rope drops down. Climbing up, our heroes are greeted by Mariah and Machiste, who it turns out have just returned--and are the leaders of the tribesmen.

As Morgan punches Torgash into the pit to settle the score, Deimos still watches through his crystal ball. He smiles as he proclaims the stage set for his final triumph.

Things to Notice:
Where It Comes From:
The title of this issue refers to the Cossack-like horseman--Morgan specifically calls them such in the story. It may have been directly taken from an older work with Cossack characters. Khlit the Cossack, star of several adventure stories by Harold Lamb, was often referred to as “the Wolf of the Steppes.” Robert E. Howard used the same phrase as this issue's title to describe his Hyborian Age kozaki.

After last issue's science fiction infused story, and the prior issue’s fantasy flourishes, this issue rounds out the review of Warlord’s influences with more a straight-on adventure yarn, if we ignore Deimos’s scenes.
Trey at 7:00 AM
Share