Here's another installment of my examination of  the adventures DC Comics' Travis Morgan--The Warlord.  The earlier installments can be found here... 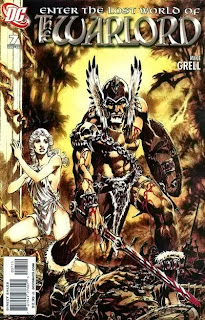 Synopsis: A crow flies across the Skartarian landscape and arrives at the scene of a battle amid ancient ruins. The crow lands on the seemingly dead body of Travis Morgan--and finds out that Morgan isn't dead!

At that moment, a beautiful, white-haired woman in a white tunic comes running toward the ruins, chased by a group of warriors. 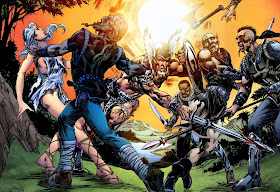 Morgan dispatches most of them, but the leader has dragged the woman to a precipice and is dragging her by the neck over it. Morgan shoots him. The man has one word for Morgan before he topples over the cliff: 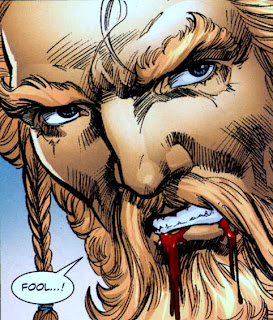 Morgan saves the woman from falling. She asks him if he's now her "champion." He can't remember.

Morgan dreams of his past fights from his days as a gladiator to leading armies. He awakens, and finds the woman tending his wounds. He can't even remember his name at first, but the woman knows him: Travis Morgan, the Warlord. She briefly recounts his history. She knows a lot about him, but Morgan can't remember who she is, though she does seem familiar. When he asks, she replies: 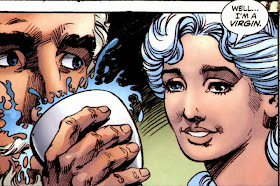 She's not terribly offended he can't remember her. This is a place of lost things, after all.

She takes him on a tour of the ruins. She tells him they were built by people who came here fleeing a great cataclysm. For hundreds of centuries they built cities and temples to their old gods. But then, there was the Great War. When their followers died, the old gods faded from memory. The survivors degenerated to little more than beasts and the cities crumbled. Of the gods, only a few remain: the most powerful, the most terrible. Occasionally, something summons them back to walk the mortal world.

The woman asks Morgan if he believes in the gods. He doesn't. "What if," she asks, "they believe in you?"

Morgan doesn't have a chance to answer, because at that moment some of those degenerate beast-men attack! 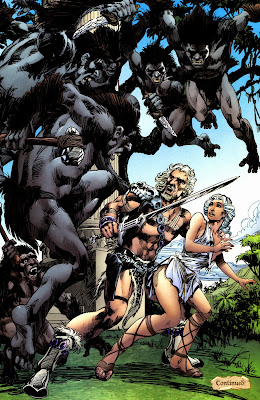 Things to Notice:
Where it comes from:
Presumably, the ancient people who settled Skartaris that the woman talks about were the Atlanteans. The portrayal of their buildings and their statues have an Ancient Greece sort of feel. This is consistent with Grell's portrayal of them in his earliest accounts (like issue #27). Later portrayals (paticularly later creators) are not as consistent and make Atlantis more generic Sword & Sorcery looking.
Trey at 7:00 AM
Share