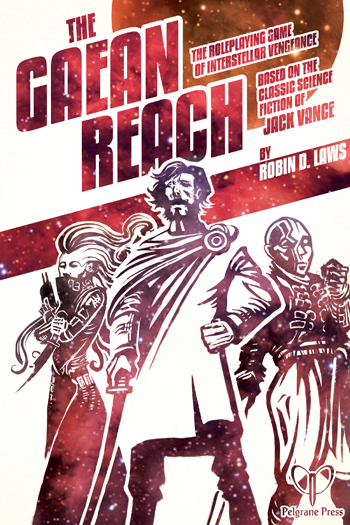 This weekend I found out that Pelgrane Press has a second rpg out based on the work of Jack Vance. (The first of course being The Dying Earth.) The Gaean Reach, written by Robin Laws with layout/art direction and cover by Chris Huth (who's work you've probably seen a lot of places--not the least of which being Weird Adventures!), takes its inspiration from Vance's science fiction tales and combines the Skullduggery system of the latest edition of The Dying Earth with GUMSHOE.

The Gaean Reach is a sub-setting of Vances connected science fiction universe. It's the setting of the Cadwal Chronicles and the Alastor Cluster trilogy, as well as several of his standalone stories. The Demon Princes series setting (the Oikumene) bears some resemblance to the Gaean Reach and the game assumes they are the same place (though wikipedia says this is inconclusive). In any case, it's a future future setting with the sort of flourishes you'd expect from the works of Vance.

I haven't got to fully digest the rules yet. I like GUMSHOE, but I don't know much about Skullduggery. Still, the setting information alone is well worth the price of the pdf.
Trey at 10:00 AM
Share