I've played superhero rpg campaigns set in the Marvel and DC Universes and even considered one set in the Atlas-Seaboard Universe (that never happened, unfortunately). Recently, though I've given consideration (probably not seriously, though, but as a thought experiment) to a campaign set in the universe of Hanna-Barbera's superhero cartoons.

One notable thing about Hanna-Barbera's supers characters is that when you leave aside the licensed properties (Super Friends, The Fantastic Four) and the completely comedic ones (The Impossibles, Atom Ant), very few of the characters follow traditional superhero conventions. Few are set on modern day Earth or have a stable base of operations and supporting cast. The only one that does (Birdman) is a bit unsual because he's more of a superhuman agent of a governmental organization.

Despite this different in focus and presentation, I think many of them could be adapted to a more traditional superhero mold. Call it "Ultimate Hanna-Barbera," if you will.  Let's run the list:

Space Ghost: A very superhero-y and well realized character as-is. Perhaps like the Legion of Super-Heroes he is a futuristic character in the same universe. A future Phantom/Batman in the same way Captain Future is kind of a futuristic Doc Savage. The other option would be to make him sort of Green Lantern-like. A space cop assigned to protect earth. Or some combination of the two?

Young Samson: (Also known as Samson & Goliath) A teen with a Captain Marvel schtick who wanders around Route 66 or Incredible Hulk style, getting into adventures, works pretty well as-is. As suppose, it would be better to have him settled down and become more of a Peter Parker. 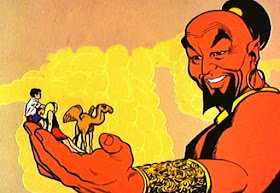 Shazzan: The cartoon has two kids transport to an Arabian Nights fantasy-land after finding their genie, but they could have just as easily stayed in the modern day. Two teens sharing a genie to fight evil would be an interesting concept.

Mightor: A Stone Age Thor, essentially. There isn't any reason a worthy successor couldn't find the magic club and become Mightor in the modern day. Of course, the character is a bit on the silly side and would probably work best for a Silver Age vibe rather than a Modern Age one.

Herculoids: In a comic book universe, the Herculoids could be sort of Ka-Zar type characters where their Savage Land is a world in another dimension, or they could be treated like a primitive Forever People and have them arrive on Earth to be super-powered fish-out-of-water.

The Galaxy Trio: These teen heroes are probably better candidates for Forever People stand-ins. You can transport them to the modern day and have them be alien heroes stranded on Earth for some reason.
Trey at 10:51 AM
Share