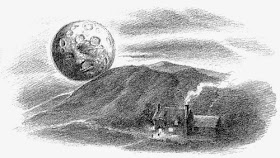 There is one holiday in the Land of Azurth that can never be scheduled because it comes when it will. Loonsday, it is called, and on Loonsday, Noom, the shy, hidden face of the Moon, turns toward Azurth. When the light of smiling Noom shines down, many strange things have been known to happen.

Here are ten strange visitations that have occurred on a Loonsday, under Noom's beaming face:

1. Street cobblestones are disturbed as by ripples in a pond.
2. A strange, scintillant mist attaches itself to a person and follows them around for sometime making a soft sobbing sound.
3. People don strange hats and spontaneous start a parade, winding through the streets of the city, as if in some ecstatic trance. At some point, they cease their marching. The participants throw their hats aside and return to their previous business. They profess no memory of the events.
4. Inanimate household objects have come to life and demanded their freedom from enslavement for perhaps an hour before returning to normal.
5. A rat-king and its retinue emerge from the sewers to hold court in a city square. He will answer 3 questions about the future, promising that at least one prediction will not be a lie.
6. Someone finds a kazoo whose sound will banish lesser devils.
7. Shadows take on weight and texture of a thin piece of felt and detach from their owners with a bit of tugging.
8. A rain of frogs occur over an area of the city, but each frog drifts down slowly under a tiny parasol.
9. A swarm of small, translucent portuguese man-of-war fly through like balloons in a strong wind. They strike anyone in their path like thrown boxing gloves.
10. Small groups of people in odd clothes with their heads replaced by glowing orbs are seen in the streets. If accosted or hindered in their obscure tasks, they will search their pockets or purses and produce a few alien coins and give them to the person confronting them. The coins hum and writhe gently in the hand.

Loonsday inserts itself into the more sensible and regular calendar of Azurth without warning. The appearance of Noom in the sky will always signal that it has begun. When Noom has set (and not in the normal way but by simply drifting away like a handful of sand blown on the wind) Loonsday is over and the normal precision of time resumes.
Trey at 7:00 AM
Share