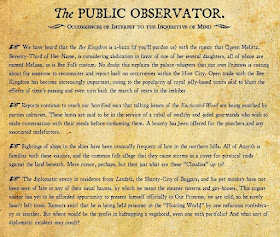 Eleven months ago, I presented a list of rumors for adventure fodder for the players from an in campaign broadsheet called The Public Observator. I thought it would be a good time to check back and see how many of those things the PCs have delved into.

They first bit on the investigation of the Enchanted Wood. It turns about things were pretty much as rumored: There was a group of wealthy pleasure-seekers paying  Ursa the Witch o' the Woods to turn them into manhounds. The PCs put an end to that.

After that, the party's curiosity was piqued by a mysterious device they found. This led them to ask the Clockwork Princess for help. They undertook a mission to get light from a magic crystal in possession of a manticore mage named Mortzengersturm. He wound up being more than a bit homcidal, so the party had to kill him and take the stone--or at least the light from it.

On the way back home, they were waylaid by a cloud giant wizard named Zykloon. He had the Cloud Folk under his thumb and was making them raid the surface world for him. The truth behind another rumor was discovered.

So that pretty much gets us up to the present day. Of the original rumors, only the doings in the Kingdom of the Bee Folk have yet to be investigated. Not too bad.
Trey at 7:00 AM
Share