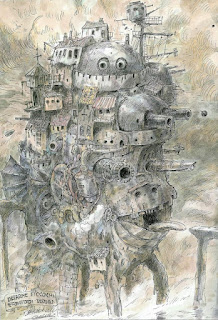 In the Land of Azurth, there has never been a greater artificer than Mirabilis Lum. His most famed creation is officially  Viola, the Clockwork Princess of the Country of Yanth, but she is far from the only wonder he created or even the first.

Lum enters history already in command of his fabulous Walking Castle. What country bred him, and where he learned the arts he practiced are unknown. Striding across Yanth, and perhaps into Sang and Virid, he sought out learned folk with whom to collaborate and hungry markets on which to test his newest inventions. That in Yanth the hostilities between Purpure and Or often meant his creations were put to military use is not entirely his fault, but admittedly, he does not seem to have been overly concerned. He would as soon build clockwork knights as self-propelling plows; He could be as enthusiastic about creating nightmare bombs as learning pills.

Some called him mad even then, but in those days he was really only singleminded and a bit thoughtless. It was when he turned his genius to the problem of death--specifically his own death--that things went awry. Some claim he developed a "Spirit-Phone" for communicating with the dead (if so, he destroyed it soon after) ,and from that point he became obsessed.

He laid cunning electrical traps for Death around the dying. He consulted every showy medium, dour necromancer, and reclusive witch he could find so they could issue challenges to Death on his behalf. If it heard, Death never deigned to participate in games of chess or backgammon or any other contest Lum suggested.

Lum brought his castle to a rest then partially dismantled it. He and his automata helpers constructed underground laboratories beneath it. Once that task was done, Lum was never seen in person again, but for years a tower stood in the crumbling remains of the castle emblazoned with a giant, clockwork replica of his face that would occasionally come to life and utter portentous sounding remarks in a booming voice, as arcs of electricity dance and climbed in the space between two antennae above. The people of Riverton worshiped it as a god, at times, and cursed it for a devil at others, but that all ended when the Wizard of Azurth came and installed the Princess as ruler, toppling the confusing relics of the past.


It's a common tavern tale to hear that Mad Lum did conquer death in the end, and works even now in a hidden laboratory in the deserts of Sang or deep in Subazurth, or some other secluded spot, but no serious-minded person believes such nonsense. For whatever reason, the Princess does not comment on the fate of her creator.
Trey at 7:00 AM
Share