My exploration of the long-running euro-comic Storm, continues. Earlier installments can be found here. 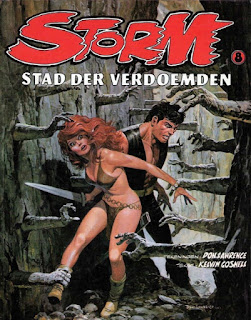 Storm and Ember take the winged horse to the ancient, ceremonial gate at the bottom of the city, which they believe will lead them to Gor's lair. They're right, and the green-skinned psychic watches them on a viewscreen--and waits.

Storm and Ember descend into the depths of the caverns beneath the city, thinking they'll find Gor at the lowest level. The walls to a passage way grow arms out of them and try to stop them: 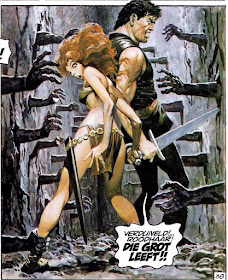 Next they fight bat-creatures and pass precariously over flows of lava until they reach Gor's sanctum:

They easily disarmed Pulg, the dwarfish head of Gor's personal guard, but Gor himself proves tougher. He disarms Ember easily them brags about the extent of his power. Storm suggests there's one thing he can't do: travel through time.

Gor admits that is true, but counters he'll soon have control over the computer in the city. Not all time machines are big and unwieldy. Storm throws the time machine belt at Gor, a belt with only enough power for a one way trip! Gor is gone to the end of time.

Back in the city, the war is over. Gor's troops have stopped fighting. Both groups can work together to rebuild.

Storm still has his one request to make of the central computer, Terminal One. Storm argues that computers should serve humans, not control: 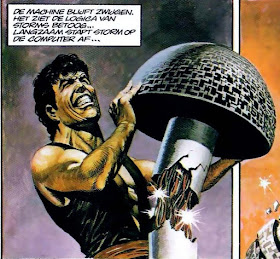 Storm and Ember leave the people of their city to chart there own future without the computer.
Trey at 7:00 AM
Share