My exploration of the long-running euro-comic Storm, continues with his adventures in the world of Pandarve. Earlier installments can be found here. 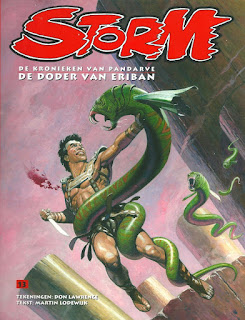 After docking the ship on the strange planetoid, Marrow, the young assassin, Renter, decides he needs to reconnoiter the city to figure out a way to get close to his target. He takes Ember with him to look less conspicuous: She can pass as his sister--or mother. Ember isn't pleased.

They see people entering some sort of arena and decide to check it out. They learn it's a sort of gladiatorial game called Barsaman. It's more than a game to the people of Marrow; it's practically a religion.

The columns lower at different rates, providing a constantly changing battlefield. In the end, only one competitor is left standing. 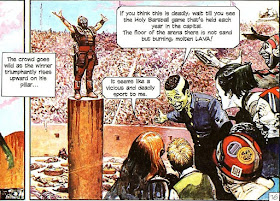 Renter is interested when he hears there is a more important Barsaman game coming:

He has figured out how he can get to his target. He returns to the ship with plans to sail to the capital. He finds that in his absence Storm and Nomad have been playing a new game--and they've got spectators.

Renter has no patience for such things. He tells them to set sail.

[Note: In the publication of this Story in Heavy Metal, Barsaman was called Barsball.]