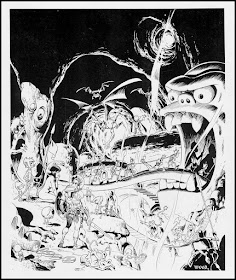 Our 5e Land of Azurth game continued last night with the party undertaking a journey to Subazurth and the uncharted region of chaotic, wild magic called "The Unfathomable." This was an adaptation of Jason Sholtis's Operation Unfathomable with a modification of backstory as presented yesterday.

The party journeyed via boat on an underground river from Rivertown in Yanth Country to Troglopolis in Subazurth. From there, they were guided to the entrance to the Unfathomable, separated the Troglopolitan region by a chasm spanned by a tongue bridge from the devil-visaged entrance. The took the admission for stealth and monster-avoidance to heart. They were also, pretty lucky with random encounter rolls.

The crossed the seemingly never-ending googlopede. Everyone but Waylon the Frogling demured from trying the fungal offerings of the mushroom folk, and he got a gray growth that made him decidely less charismatic until it healed. They met a strange, depressed cyclops, who they tried to counsel. Then, Kully the Bard and Shade the Ranger fought three brain-bats, but made quick work of them. 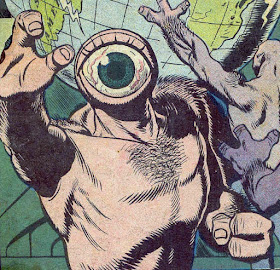 They found a strange floating vessel and soon discovered it belonged to Major Mungo Ursus, a werebear in Her Majesty's Special Bureau. He explained he was here in this alternate future or past to stop Doctor Hugo Zunbar Gorgomza, the self-styled Robot-Master, who planned to utilize the Null-Rod to create a magic-free future where his robots could rule. Ursus planned to destroy the rod so Gorgomza couldn't get his hands on it.

Not entirely trusting of what Princess Viola would do with the Null-Rod, the party agreed to let Ursus destroy it--if he would give them his gamma ray pistol. Ursus agreed, and the he joined the party in going toward the west where his instrument readings had said the rod might be.They found a cave with a minature ice-city, and tiny beings who were worshiping the Null-Rod. 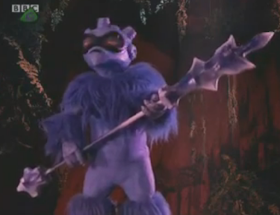 The party stole it. The Major destroyed it with his pistol, then handed the pistol over to the party. He admitted he had permanently set the power setting low so they wouldn't destroy civilization. The party agreed this was probably wise. Then, the werebear left in his saucer, and the party returned to the surface, mission accomplished.
Trey at 7:00 AM
Share