This post originally appeared in March of 2010. Kulu was the name of an NPC created by my cousin, who dungeonmastered my earliest games of D&D. 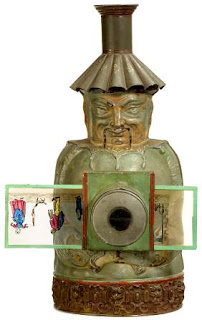 The exact number of these items in existence is unknown, but it's theorized to be less than seven. Tavern-tales attribute their creation to the infamous Kulu the Illusionist, but these devices are actually the products of an unknown--though no less malign--genius.

These devices appear like any other mundane example of the primitive slide-projectors known as magic lanterns, the only difference being there is no way to change the slide being projected. When activated by placing a candle inside, the device projects strange and unsettling images of distorted, ghost-like figures and beasts. The projected image is larger and more distinct when a magical light-source is used, like a hand of glory, for example.

The image projected is no static scene, but a glimpse of the Negative Material Plane. The longer the device is left on, the thinner the "skin" between worlds becomes until the beings, the phantoms, from that plane are able to enter the Prime Material. When seen in the wan light of the projector the phantoms are ghostly pale, but when they pass out of the projector's cone of light, they become deep, featureless shadow. Their touch drains living things, indeed their very presence can can cause the wilting of nearby plants.

When the phantoms first emerge into the Prime Material, they may be given the name of a single individual. This individual the phantoms will seek out and drain with their life-stealing touch until he is dead. The phantoms are able to travel at great speed, perhaps by traversing between points of mundane shadow, so distance is no obstacle, but it does take time for them to locate the individual (by what ever eldritch means they utilize) and this process seems to take longer for more distant targets.

If they are prevented from getting to the individual, they will continue to try to do so until they are destroyed, or they dissipate. Phantoms drawn forth by light from a normal candle or other mundane light-source can only hold coherent form for twenty-four hours in the Prime Material, and every moment spent in bright sunlight doubles the rate of dissipation. Phantoms drawn forth by a magical light-source in the lantern will last for a week, or perhaps more, depending on the potency of the magic used, but are still just as susceptible to bright sunlight.

The wise user never allows more than three phantoms to emerge before extinguishing the lantern. More than that number, and the phantoms become likely to act more willfully, killing the summoner and anyone else they find rather than heeding a command. If the lantern is left lit and unattended, phantoms will continue to emerge until the light-source burns itself out, and wander out into the world with undirected malevolence.

The lantern can be used to study the beings of the Negative Material Plane, but only if care is taken to limit the length of its usage so that no phantoms emerge.
Trey at 7:00 AM
Share