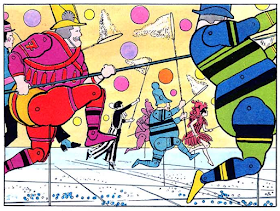 One of the most enigmatic figures of the Anadem and Old Earth is the Toymaker. Hailed as a genius, albeit an eccentric one, his smaller creations are sought by wealthy collectors and his larger recreational devices, benevolently gifted to communities are sources of civic pride. Each of these is marked with a modest, but never-tarnishing brass legend proclaiming it "A Gift of the Toymaker."

A list of known works of the Toymaker would run too long, but I will remind you of but a few you have likely heard of: The Clockwork Courtesan of Yejem, the Arcade Spatterlight in the Pleasure Garden of Oressund Major, the Leaping Lepidopterists in the possession of the Pajandrum of Gloorb, and of course the Merry-go-Round Tower of Ooth-Ithrain,

The Toymaker's most commonly encountered creation are the Wind-Up Gnomes. Most serve their generally wealthy owners as servants, but a few have experienced some sort of damage and become freewilled.  Some localities are fearful of freewilled wind-ups, but in most places they are accepted into society. There are persistent rumors of isolated wordlets of wind-up beings that have become quite mad and constitute a danger to flesh beings, but these are no doubt just old space-sailor tales. Probably.

No one knows where the Toymaker himself resides. Some people believe the Toymaker to not be an individual at all, but rather a brand. They suggest that it perpetuates itself by the kidnapping of promising artificers and forces them to work on its factory world, guarded by ever-smiling wind-up soldiers. If such a world existed (and really, it is ridiculous to believe it does), it might even lie beyond the Anadem, perhaps in the wilds of the Belt. 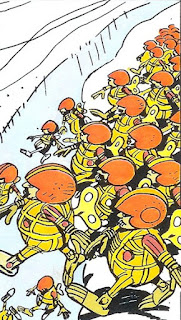