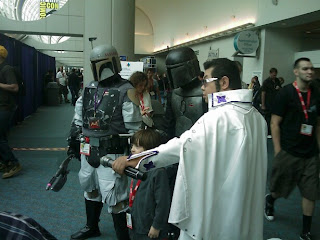 Day two at San Diego Comic Con starts late because my co-conspirator, Brandon, doesn’t arrive in San Diego until 2:30 AM having been cutting the trailer for a talking animal film until late in LA.


We attend a “State of Animation Panel” which portends ill because it is boring. Particularly after the anticipation of standing in line half and hour, and getting yelled at by con staff. The exhibit hall is even more dense than Thursday, and going anywhere is swimming upstream. Con disillusionment rears it’s head.

Then, Guillermo del Toro makes it right with his profanity-peppered intro to teaser footage from the remake of the 70s horror classic remake he’s producing and scripting Don’t Be Afraid of the Dark. It looks really cool, and he’s really cool.

Things go good for a bit, and I pick up a cool ERB retrospective illustrated and signed by Mark Wheatley and a pulp art book. Then there’s the Star Wars pavillion where you can take a picture than makes it look like you’re an action figure in blister pack on a Boba Fett card. Rumors of invites to Disney’s TRON sequel party or DC’s party entice us, but Brandon’s friend’s text messages are all over the place, and vague.

We instead end the evening with anime and drinks at the hotel bar.

Day three dawns with a panel on the increasing profile of comics in popular culture. This is interesting, but its our second choice as we would have preferred to attend Warner Brothers film teaser mega-presentation, but for the multiple tents full of eager attendees who arrived way before us . After that we make the rounds in the exhibit hall again and I score an advanced reader’s copy of Tony DiTerlizzi’s new illustrated book The Search for Wondla which looks great.

Then, we’re Brandon’s friend finally comes through and we’re whisked to Wired’s party, where True-Blood is served, and several cast members from Chuck and True Blood are in attendance. DVD sets of season two of True Blood come as door prizes. Did I mention this was all courtesy of Patron, who has a make-your-own Margarita booth? Well, it was.

Gotta go.  I have to find a way to pack the things I've bought and the ephemera I've acquired in my bag for the plane.
Trey at 7:00 AM
Share