Do We Want to be that Popular? 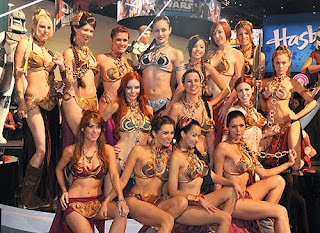 Back from Comic-Con finally, and I have to say I’m glad its over. Three days is more than enough. One more Comic-Con related note before returning to my regular programming, but this one bears more relevance to role-playing gaming.

At a panel I attended, I heard Michael Uslan hail the victory of comics. He’d attended the first comic convention ever (120 people), when it was an outsider hobby and fans didn’t know each even existed. He pointed out just how far we fans have come to day when comics properties are big business, and an the entertainment industry is paying attention. “We’ve won,” he said.

Whitney Matheson’s observations carried a counterargument, though. She pointed out how the comics and artists related booths at SDCC got squeezed into less and less acreage, and got pushed progressively into the hinterlands, while movie studio and video game pavilions grew and grew, and too the prime real estate.

I think this is an important observation and lover’s of any niche hobby like table-top rpgs might do well to remember: fringe hobbies/art forms “accepted” into the larger culture don’t triumph, they're subsumed. Wider interest means moneyed interests get into the driver’s seat.

Greater acceptance would mean the spirit of DIY that runs through most of the rpg-world would be driven out or marginalized. Some might say this already occurs, but its nothing like what would happen if the kaiju Global Media Conglomerate turned its radioactive gaze on helpless RPG City. Granted rpgs are perhaps not as “exploitable” as comics, in terms of IP, but I’m still pretty sure there’s a lot of bad that could come from it.

In that same panel Brad Meltzer pointed out the golden, ornate, Throne of Odin display (advertising, the upcoming movie) as the perfect metaphor for Comic-Con: “it’s big--takes up a lot of space, gaudy...and empty.”

Well, except for the occasional big photo-op: 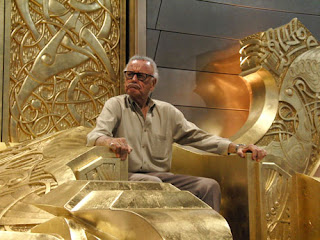 Maybe in rpg-land our king’s not terribly photogenic, and his throne-room’s kinda shabby--but he rules at our sufferance, not that of some occupying army.
Trey at 8:05 AM
Share