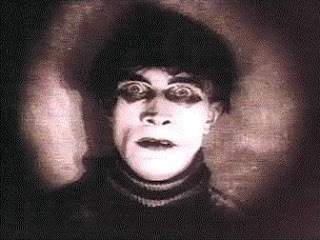 The ghouls of the City’s world aren’t undead, but rather a subspecies of humanity whose origins are lost in history. If they were in Ealderde, the Old World, their presence is well hidden, perhaps obscured by legends of vampires and the like. In the New World, after centuries of mistrust and antagonism, the ghoulish community of the City has struck an unease truce with its human neighbors.

Ghouls appear as thin, sometimes almost cadaverous, humans with unnatural pallor and sharp teeth. Ghouls have little to know body hair. Young ghouls have hair on their head, but most have lost it by middle age. Their pupils are larger than humans, and reflect light like those of cats.

Their appearance, though somewhat unsettling, isn't the (heh) bone of contention between them and humanity. It’s their dietary habits. Ghouls are eaters of carrion, and have a taste for human flesh. They do not, as often portrayed in pulp stories eat live humans, or attack them like a predators. The truth, though, is perhaps equally lurid--in addition to their taste for human meat, they require the consumption of human brains periodically. Scientists feel they require some essential nutrients present in human gray matter. Those who don’t consume it in 14-28 days (depending on the individual) begin to suffer from a degenerative, neurological malady.

Ghouls have always lived underground, and tend to come out to scavenge at night. In the City, the underground construction which produced waterworks, steam tunnels, and the subways provided spaces for the ghouls to inhabit. These more modern structures they managed to connect with more older, labyrinthine structures built by the Ancients from some inscrutable purpose. This ramshackle area of ghoul communities is known as “Undertown.”

Undertown is a sovereign city, but has only been able to survive by making connections with the human city above. Ghouls relay grave valuables and things hauled from the underground to policemen, organized crime, and low-level bureaucrats, and no one notices bodies that disappear from potter’s fields, or even the City morgue.

Ghouls produce no physical works of art or literature, as far as is known. Their only material culture is scavenged from the upper world, or looted from graves.  They do however produce strange music, which many find unsettling, but others strangely appealing. They also have been known to put on plays--unsurprisingly comedy’s filled with “gallows humor.”

Occasionally, ghouls get hopped up on fungus from abandoned subways, or drunk on brain’s soaked in the bootleg liquor from their stills, and they go on a bit of a tear, scaring upper-folk and generally make a nuisance of themselves. Then, police and deputized civilians are sent down to crack a few ghoul skulls, and some ealdormen make noise about the “ghoul menace.” Mostly, though, the two peoples remain segregated.and mistrustful, but willing to live and let live. 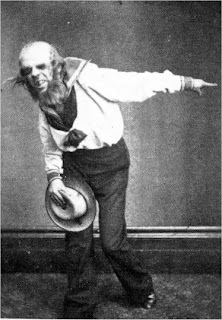 Infamous ghoulish Vaudevillian Abaddon Blanchefleur in his last performance before his arrest.
(Thanks to Matt, dwelling East of Eden in the Land of Nod for this pic)
Trey at 7:00 AM
Share