Fear and Loathing at Comic-Con 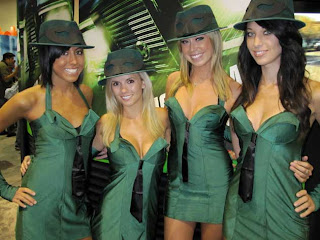 One day down in San Diego, and alright--there wasn't any loathing, and only a little fear, but the title sounded good...
It was a long day, boarding a plan on the east coast a 7:30AM with comics blogger/journalist Chris “Invincible Super-blog” Sims, who has it turns out is afraid of flying (“the takeoffs and landings,” he says) and not afraid of having a Mai Tai before 11pm.
Five hours later, we’re in San Diego, and I have to find the mysterious woman whose name I have only seen in a text message. and try to get my ticket. When I finally talk to her she says I can find her under the purple SyFy balloon and: “I’m tall.”

She isn’t kidding. The pretty, bright-smiling, giantess leads me into the convention center—losing me briefly as the gendarmes detain me at the door, but quickly retrieving me—and I get the passes and associated swag for myself and my as-yet-to-arrive friend from LA.

But what about the con? Well, parked outside is the black beauty, but the outfits of the three Green Hornettes in front of it seem impractical for crime-fighting. People take plenty of pictures, though. Everywhere, people are barking things at you like carnies, conspiratorially handing you dubious ephemera like they’re trying to invite you to a rave, or to a church revival. And everywhere, there’s the press of humanity like a general admission concert.

Of course, you’re not even in the exhibit hall yet.

Inside, well, imagine a carnival if every carnival ride was as commercially-motivated as an 80s toy tie-in cartoon, then combine that with a big trade show of some sort, what ever kind you’re familiar with, as long as it has glitz and plastic-pretty sales folk with big smiles. Then liberally apply cosplayers—teen anime characters being moody in packs, older girls favoring the most revealing superheroine outfits. Guys in multi-color body-stockings.

Then, of course, there’s content. A panel on “genre-bending” where all the authors say they do it because its cool, except contrarian China Mieville who worries it may not be—and Scott Westerfield gets to give a PowerPoint demonstration on his new novel, which argues persuasively that tanks would be better with legs.

Before that, there was a panel on urban fantasy where the last question posed was “which class of supernatural being do you find the sexiest?” The answer involved musing on vampires and the possible downside of no circulation.

And with that, we draw the curtain on day one.
Trey at 9:35 AM
Share