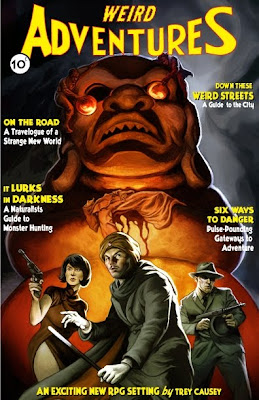 I'd like to officially announce Weird Adventures--a supplement based on (and expanding upon) the world of the City that I've been discussing here for many a post.  What you see above is the tenative cover design, featuring a painting by Doug Stambaugh.
The supplement will be geared toward the generic "old school" game, but feature mostly setting material usable for any game system.  I'll probably get into more detailed rules-related digressions here on the blog.

Planned contents include:
In addition, it will feature great artwork from the aforementioned Doug Stambaugh, Chris Huth, Seth Frail and others.

I'm tenatively planning for a late fall release.  More details to come...
Trey at 5:42 AM
Share