The Hills Have Eyes...And Teeth 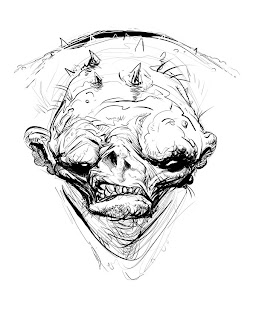 If the regular human and hilly-billy giant inhabitants of the Smaragdine Mountains weren’t enough to contend with, travellers in remote areas may have to face ogres. Theses misshapen brutes are criminal ne’er-do-wells at best, and man-eating psychopaths at worst.

Ogres are thought to be degenerate relatives of the hilly-billy giants, and as such descendents of the Ancients. While the giants are generally well-formed and human-like in appearance except for their size (the males being a little coarsely featured, admittedly), ogres are misshapen in a variety of ways, akin various birth defects and disfiguring metabolic conditions. Ogres are also of squatter, more Neanderthalish build--they're typically around the height of the tallest giantish females (around 9 feet), but weigh as much as a male of the race.

The cause of the malformations of ogres is a subject of some scientific controversy. Some experts hold that its a result of centuries of interbreeding, combined with possible toxic exposures from the bootleg alchemicals that have been making for generations. Others believe that ogre ancestors made pacts with dark gods, and were twisted by forbidden magics--though even this school of thoughts concedes that a degree of inbreeding occurred when they were driven deep into the hills by the giant-folk. Still others think that ogres may be related to giant-folk in a way analogous to how ghouls are related to normal humans--a view likely to result in one getting “invited for dinner,” if voiced in front of ghouls.

Ogres live in extended family units back in shacks in the backwoods, or in cave lairs. Their relations are complicated due to interbreeding, so many members of the family will have dual relationships reflected in their kinship terms--”mother-sister,” “brother-husband,” or the like. In addition to making bootleg liquor and poor quality alchemicals, they also may waylay travellers on remote roads or trails. Robbery would be the least of one's concerns, as ogres are notoriously promiscuous eaters--they eat any sort of roadkill, and have been known to have a fondness for human-flesh. At the very least, they have a reputation for torture--something like bad children tormenting small animals, but on a larger scale.

Luckily, ogres don’t exist in great numbers. Rampant abuse of substances and violence kills many, and the same genetic defects that lead to their physical deformities cause a high rate of stillbirths. What they lack in numbers, however, they make up for in pure meanness.


Random Ogre Deformity:
Roll of 1d6 determines the number of deformities posessed by each ogre, then roll d20 the requisite number of times on the following table: