Let's re-enter the lost world with another installment of my issue by issue examination of DC Comic's Warlord, the earlier installments of which can be found here... 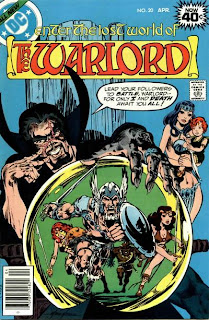 
Synopsis: Morgan and his companions lead “a ragtag band of soldiers, adventurers, and mercenaries” north into twilight lands, and toward the Terminator--the cusp between the outer and inner earth--and eternal darkness. There they hope to find Deimos, and Morgan's and Tara’s kidnapped son.

Within his fortress, Deimos watches their approach in his crystal ball, with Ashiya and Joshua nearby. Deimos tells Ashiya that the son will be the key to the defeat of the father. The scrolls of blood have shown him how to use the technology of their ancestors to bring about his vengeance. He uses a knife to take a scrape of skin from the infant boy, then places it inside the sphere of an ancient machine. As Deimos works the controls, Ashiya watches in stunned silence, as the sphere fills with energy, and the speck of skin grows and swiftly develops into a clone of Joshua. Deimos plans to hedge his bets by keeping the real heir to Shamballah in his power, no matter what. He sends Ashiya and the original child away to make his final preparations to greet Morgan.

As the Warlord’s band nears the city, Deimos turns his magic upon them. He causes an earthquake to bring a canyon walls down on them, decimating their group. No sooner have the rumbles of the avalanche died away, then a swarm of bat-fiends attacks the few survivors. Only our four (named) heroes are left alive to storm the castle.

Soon, the heroes are at the Grayskull-esque drawbridge of the fortress. The way is clear, and unguarded, which makes them suspect a trap. Thinking only of finding his son, Morgan moves across the bridge alone--only to have it fall away beneath him. He manages to grab a chain and keep from falling onto the spikes below. Then, his sharp reflexes save him again as the portcullis falls. He’s inside the castle, but separated from his friends. And the bat-demons are coming.

Morgan fights them savagely, but it looks like he might be undone by their numbers, when flaming oils falls on them. Morgan tells Deimos his aim is bad, but Deimos says his minions got too eager--and he wants the Warlords for himself. He taunts Morgan to climb the stairs and enter the open door.

Morgan moves through dimly lit corridors warily, always taunted by the laughter of Deimos. Finally, he enters a room where he finds teh devil priest seated upon a throne. Deimos demands he bow before him. Morgan responds by stabbing his sword through Deimos’s chest, and the chair behind him.

But Deimos only laughs. He can’t die now due to the power of the Mask of Life, which Morgan unwittingly delivered to his disciple, Ashiya. Unfortunately, while the mask gives him life, it doesn’t keep his body from decaying in the sun, so he must replenish himself with human blood.

Deimos tells Morgan that since killing him would be too easy, he’ll have Morgan fight his champion instead. He pulls back a curtain to reveal Joshua held in the grip of another Atlantean device. Morgan tries to rescue him, but Deimos holds him back with flames. Morgan can only watch in horror, as Deimos activates the device, causing Joshua to grow to a full grown man before his eyes.

This is Deimos’s champion--the Warlord’s own son. Morgan can kill him, or be killed himself. “Either way,” Deimos taunts, ”you are destroyed.”

Things to Notice:
Where It Comes From:
Grell reaches into the mythic storytelling tropes well to pull out a little father-son conflict here, which echoes through Greek mythology, Le Morte D'Arthur, Shelley's Frankenstein, and Star Wars.

The name of the foreboding Terminator region where Deimos's castle lies has nothing to do with killer robots from the future, but instead derives from (the misapplication of) the astronomy term for the dividing line between the bright and shaded regions of the disk of the moon or an inner planet. It also helped, I'm sure, that it has then same Latin root as "terminate," both deriving from terminus, "boundary marker."
Trey at 6:50 AM
Share