The Warlord is dead! Long live The Warlord! This is my issue by issue examination of his adventures. The earlier installments can be found here... 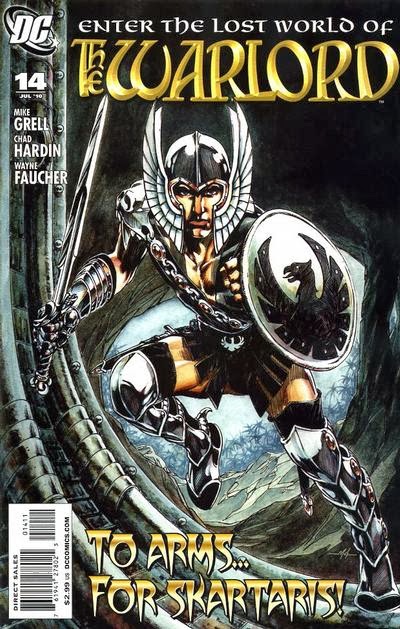 Synopsis: The so-called dragon that Shakira assures them isn't, sends our heroes scrampling for cover after Joshua sticks an arrow in it. Joshua's hiding place isn't quite good enough, and his sword hand gets seared by a fiery blast. The beast retreats, but the new Warlord's hand looks pretty bad: 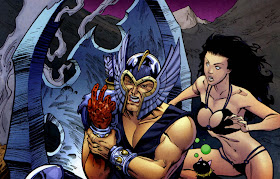 At the same time, Tara feels intense pain and wonders if something is going wrong with the pregnancy. Jennifer checks on her only to get pushed away by a mystic blast from the baby in Tara's womb! It appears Joshua's sister to be can feel his pain.

Joshua and friends return to the old blacksmith. Joshua needs a new sword forged: one that can stand the heat. He brought the large piece of metal that shielded him back in the cave for that purpose. McBane thinks it's something from meteorite.

Joshua collapses with his injuries. While Alysha tends him, McBane helps the blacksmith at his forge. Joshua's hand begins to heal at an incredible rate. Alysha and McBane can't believe. Shakira is more jaded and says: "It's just magic."

Back in Shamballah, Tara's pain is gone. Jennifer explains that her daughter is healing Joshua. Tara is suprised to learn it's a girl. Jennifer says that as her half-sister and Joshua's full sister she shares traits of both them. Then, Jennifer senses something that suprises her...

Meanwhile, Joshua's hand is almost completely healed, whcih is a good thing because the blacksmith has completed the sword: 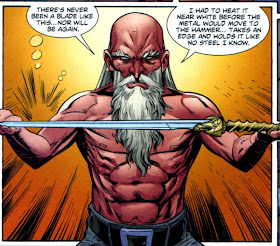 He also had enough metal to make a gauntlet, greaves, and a shield. The blacksmith asks Joshua what he wants on his shield but we don't hear his answer. Meanwhile, Alysha has been kidnapped by the father of last issues sacrificial "victim." He's taking her to the dragon.

Joshua and McBane trail them to the cave. They go in: Joshua with his new sword and armor and McBane with an AK-47.  Going deeper than before into the "dragon's" lair, they find it isn't an asteroid at all, but a space ship. They also find Alysha and her kidnapper:

The man begs to be killed and Alysha obliges him--but the shot brings the alien running. Joshua puts an area through it's searchlight "eye" and McBane lobs a grenade at it. The creature keeps coming. Joshua sends his friends away, and goes into battle: 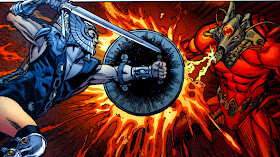 The two fight. Joshua manages to damage it's flamethrower mask. With the mask off, the alien reveals it can speak. It calls Joshua (and his people by extinction) primitive and makes an interesting claim: 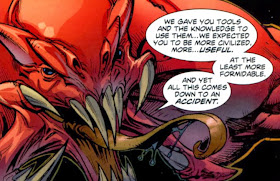 Joshua promises what happens next won't be an accident. He vaults over the creature's head and delivers a blow to the back of his neck. At his friends' urging, Joshua runs out the door that is irising shut to meet them.

The alien is apparently dying, but wants to strike one last blow. He pushes some buttons on a console, that send a beam of energy up from a group of step pyramids out of the polar opening and into space. He also apparently sets his ship to self-destruct. Our heroes get our just in time.

On the outer world, a couple of astronomers track a signal leaving the earth and shooting out toward Orion. E.T. has just phoned home!


Things to Notice:
Where it comes from:
I would be surprised if alien visitors have never been mistaken for dragons before, much in the same way they've been mistaken for gods, but I don't know of a specific story. Marvel Comics' Makluans fit the bill, I suppose
Trey at 7:07 AM
Share