Last night, our 5e Land of Azurth campaign continued. The party met with the Goodes of Swells Head and agreed to try to get their daughter Gwendolin back. The Goodes believe she was kidnapped by the infamous pirate, Black Iris. Waylon (the frogling thief), Erekose (human fighter), Kairon (tiefling fighter), and Dagmer (dwarf thief) board the keelboat Venture under Captain Tubbs to make the journey down the Yellow River.

In the area of the Beggar City, the boat is attacked by river pirate dwarfs using a sort of Hunley-style primitive submarine disguised as an alligator. Kairon breaks open the vessel with magic, but the blast does some damage to the Venture. After the pirates (the Gar Brothers) are sent packing, the captain decides to tie up the boat so they can do repairs.

The Lardafans come out to the bank to great them. In the crowd are Waylon's old bandmates who look a bit like these guys: 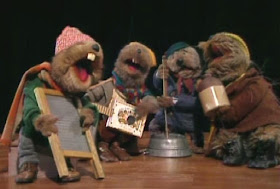 Waylon brags about being an adventurer. His old friends, and his very relaxed old mentor King Kuel, ask for the help of the party in helping the Lardafans with a rogue Heap that has been periodical attacking the town. The Lardafans believe the Heap's violence has something to do with a warlock that lives alone in a shack on an island at the center of Lost Lake.

The party reluctantly agrees--for a pick of the Lardafan treasure pile. The head out on a skiff to lost lake despite the sign: 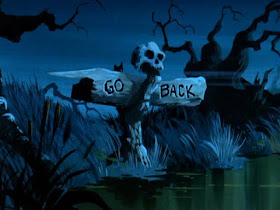 The Heap attacks from the water as they close in on the shack. Four against one is good odds, but the Heap is plenty tough, so the fight is a tough one. Waylon goes for the shack to see if it holds a clue to what's going on. He finds a man (presumably the warlock) who is long dead with an empty wooden box in his wands with some vegetation hanging on the side.

Meanwhile, Erekose has been knocked unconscious by the Heap and Dagmar has been engulfed! The cleric manages to fight her way out and finds a skull inside as she does. Once the skull is removed, the Heap seems to collapse on itself, and slinks away.

The skull is magical, old and inscribed with runes. It also seems to fit in the box Waylon found. Taking the skull, the box, the Book of Shadows, and the various spell components in the warlock's cabin, the party returns to Lardafa.

They're greeted with much fanfare by the Lardafans and given the promised pick of the treasure trove--which turns out to be Gilligan's Island-esque version of an oversized claw machine. Each member of the party gets an odd trinket.

Their (side) quest completed, the party boards the boat for a night's rest.
Trey at 7:00 AM
Share