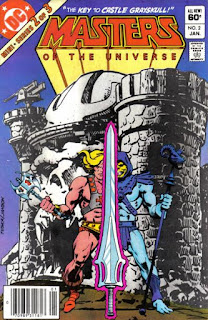 "The Key to Castle Grayskull"

Synopsis:  He-Man and Battle Cat enter the jungles of Eternia is search of a talisman. They meet Ceril, a long time friend of He-Man's, and other members of his primitive tribe. He-Man recounts his origin: how as Prince Adam he came upon Ceril's village on a hunting trip and found it in the thrall of the sorcerer, Damon. Adam would have been defeated by Damon as well, had not the Goddess intervened, transforming him into He-Man. Since that day, Ceril's tribe have been allies of Adam's father.

As luck would have it, Ceril has seen the talisman He-Man seeks. They are on their way when demons appear and attack them. He-Man manages to get to the cave where the talisman is, entering where others cannot due to the protection of his power-vest. He-Man grabs the glowing talisman, and he and Battle Cat disappear.

Meanwhile, Stratos, Teela, and Man-at-Arms fly toward the churning waters of Sea of Blackness. Using a potion that Tarrak gave them, they are able to breath underwater for an hour. With the clock ticking, they locate the talisman in a temple in a city of the mer-people. Before they can get to it, they're attacked by Mer-Man and his people.

Mer-Man plans to betray Skeletor and take the power sword for himself. The odds don't look good for the heroes, but then Skeletor appears and confronts Mer-Man's betrayal. He also warns the mer-people not to harm his allies, unless they too want to face his wrath. Teela takes issue with that, so Skeletor is like "have it your way." and removes his protection.

Their time running out, and the mer-people pressing the attack, Stratos manages to grab the talisman. The heroes disappear. They find themselves in a strange place: 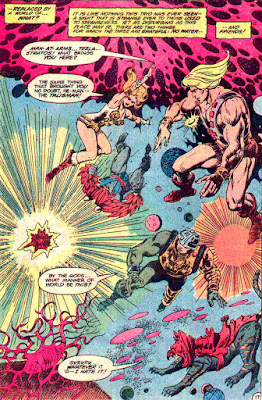 Skeletor shows up and taunts them again. He sends them deeper into the weird realm to retrieve the power sword. Neither the heroes nor Skeletor know that they are being watched.

Again demons attack the heroes. Their numbers seem endless. The heroes can't figure out who would have sent them if Skeletor wants them to succeed. Suddenly, the demons are blown away by a strange wind. Then: 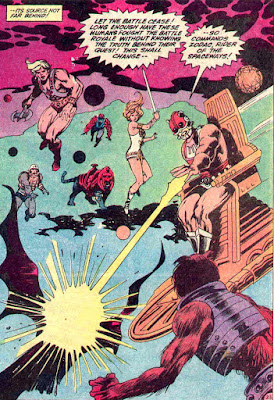 Commentary:
Prince Adam's origin related here has never appeared in other media.
Trey at 7:00 AM
Share