I recently picked up both Volo's Guide to Monsters and the Tome of Beasts. Both I think are going to be useful monster books for my 5e game, but in different ways. 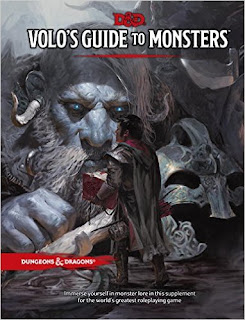 Volo's Guide is slimmer (just 223 pages). Its pure monster stat page count is even slimmer as it spends quite a view pages on other stuff. Part of that other stuff is new races, which is great, though I don't know how many of them I will use in my Land of Azurth game. Still, more examples to model DIY races is always good. The other part is Monster Lore--expanded info on previously published classic monsters, including lair maps and what not. I could see this being really useful and their are some good ideas here, but my current campaign uses some pretty variant interpretations of a lot of these monsters so it's of less utility for me.

The actually monsters include a lot of variants of existing creatures. Most of these don't excite me too much, The appendix of additional nonplayer characters will probably be the thing I use most in play. 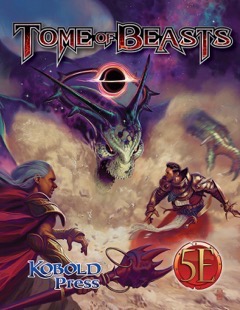 The Tome of Beasts is beefier (426 pages), all of it traditional monster stats. Some of these feel like their not quite ready for primetime--but in someways that gives ToB a more daring feel compared to the "safer" Volo's Guide.  A bit like Fiend Folio vs. Monster Manual II, ToB also gives higher crit level monsters. I provides some much needed bosses compared to all the mooks and lackeys of the the official monster manuals. Though most of these monsters don't cry out to be immediately used in my campaign but their are a few (the Boreas and some of the Fey Lords and Ladies) I definitely want to play some adventures around.

While not indispensable, both of these bestiaries would be very useful for a 5e game. If you could only by one, I would say it depends on what you're looking to do. If you need more races or want to really flesh out certain "classic" D&D monsters (like the Mind Flayer, Beholders, or Giants), you probably want Volo's Guide. If you just need monsters and lots of them to stock your adventures, Tome of Beasts in probably though one you want.
Trey at 7:00 AM
Share