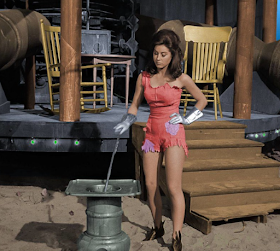 There are rustic folk that sometimes visit the Anadem from more remote asteroids. These insular people build ramshackle settlements on whatever tumbling rock or abandoned worldlet they can find, eking out a hardscrabble existence growing what crops they can and raising their weird livestock, but often staying only one season. Long enough to produce one good batch of their primary trade stuff and cultural artifact: earthshine.

Earthshine, so these rockhoppers aver, can only be distilled from the captured radiance of humanity's homeworld. It is collected in "pans," broad-rimmed, shallow dishes which are pointed at the Earth and somehow collect it's light, which then flows down coiling tubing to the heated processing apparatus. The end product is clear but tinged silvery-blue has a slight glow in darkness. It can be “poured” or contained, but moves more like a heavy fog than a liquid. It is bottled in opaque receptacles--sunlight will degrade it within others. After a day or two, it becomes more volatile, and can by used as an intoxicant by inhalation from bottles or from cloths on which some of the substance has been pored.  The earthshiners also use it some how to power their dubious vessels to cross the void, to the next convenient place to make their concoction.

The Earthshiners are clearly of human stock, but tend to be taller than Earthly humans, strapping and clean-limbed in youth. In old age, they can sometimes by gnarled, perhaps even dwarfish. It is believed the habitual use of earthshine takes its toll.

For obscure reasons, the fey empire of the Moon has no love for the Earthshiners. It's swift, silver-white patrol ships uproot them where they find them, deporting them beyond the bounds of the Anadem.