Into The Phantom Jungle

Last night, I got my other gaming group to try Broken Compass in one of our "not Azurth" off-weeks. I decided to run "The Phantom Jungle," which I found on One Shot Adventures. The group were headed up the Javary River in South America, inadvertently carrying and Inca artifact sought be a cult.

As we the other group, the part was impressed by the simplicity and cinematicness of Broken Compass' rules. I made some pregen's for them (well, adapted some from the basic rules) using some new images. 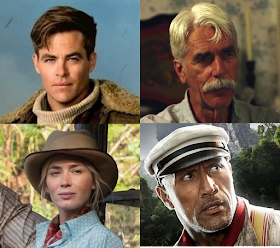